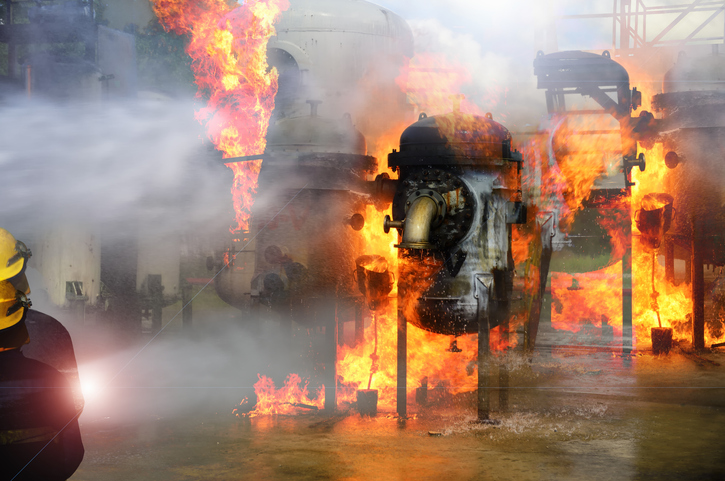 Houstonians were forced to cope with the effects of two major petrochemical plant fires over the St. Patrick’s Day weekend.

The two incidents serve as a grim reminder of the risks facing a densely-populated metro region that currently houses the largest concentration of petrochemical processing plants and storage facilities in the world.

The worst of the petrochemical plant fires erupted shortly after 10:00 a.m. on St. Patrick’s Day, when a tank ignited at the Intercontinental Terminals (ITC) storage facility in the Houston suburb of Deer Park.

The inferno quickly spread to six other storage tanks on the 265-acre site, creating clouds of thick, black smoke that could be seen for miles throughout eastern Harris County.

The fire remained intense on Monday morning, forcing crews to take up a defensive posture to prevent its spread. The blaze will burn itself out once it consumes the remaining fuel, a process that will take at least two more days.

According to ITC, five of the tanks involved in the Deer Park petrochemical plant fire contain “gas blend stocks used in the production of finished gasoline, and base oil commonly used as machine lubricants.”  A sixth tank stores highly-flammable naphtha, while two others contain xylene and toluene.

The hazardous nature of the chemicals prompted Harris County authorities to issue a “shelter-in-place” order for much of Deer Park on Sunday. They lifted the order early Monday morning, however, after repeated air quality readings remained below hazardous levels.

Just one day earlier, a fire at the ExxonMobil Baytown refinery sent another plume of heavy smoke into the skies around Houston.

The March 16th blaze apparently involved a furnace on one of the refinery’s hydrofining units.  While the incident “resulted in emissions to the atmosphere,” authorities opted not to issue a “shelter-in-place” prder for the surrounding area.

“Pollution Control is still monitoring the air south of the plant around La Porte and Clear Lake with no reading at this time,” Harris County Judge Lina Hidalgo during a media briefing on Saturday afternoon.

Emergency crews brought the ExxonMobil refinery fire under control within three hours, and the skies around Houston began to clear by 4:00 p.m.

Undefeated Plant and Refinery Explosion Lawyers with #1 Largest Wins in History. Call 1-888-603-3636 or Click Here For a Free Consultation

Our Undefeated Houston Refinery Explosion Lawyers have successfully represented over 1,000 industrial workers in connection with the largest plant, refinery, and oilfield accidents and explosion in history.

If you or a loved one were injured in an industrial accident, please call 1-888-603-3636 or Click Here to send us a confidential email via our “Contact Us” form.

All consultations are free, and you’ll owe nothing unless we win your case.