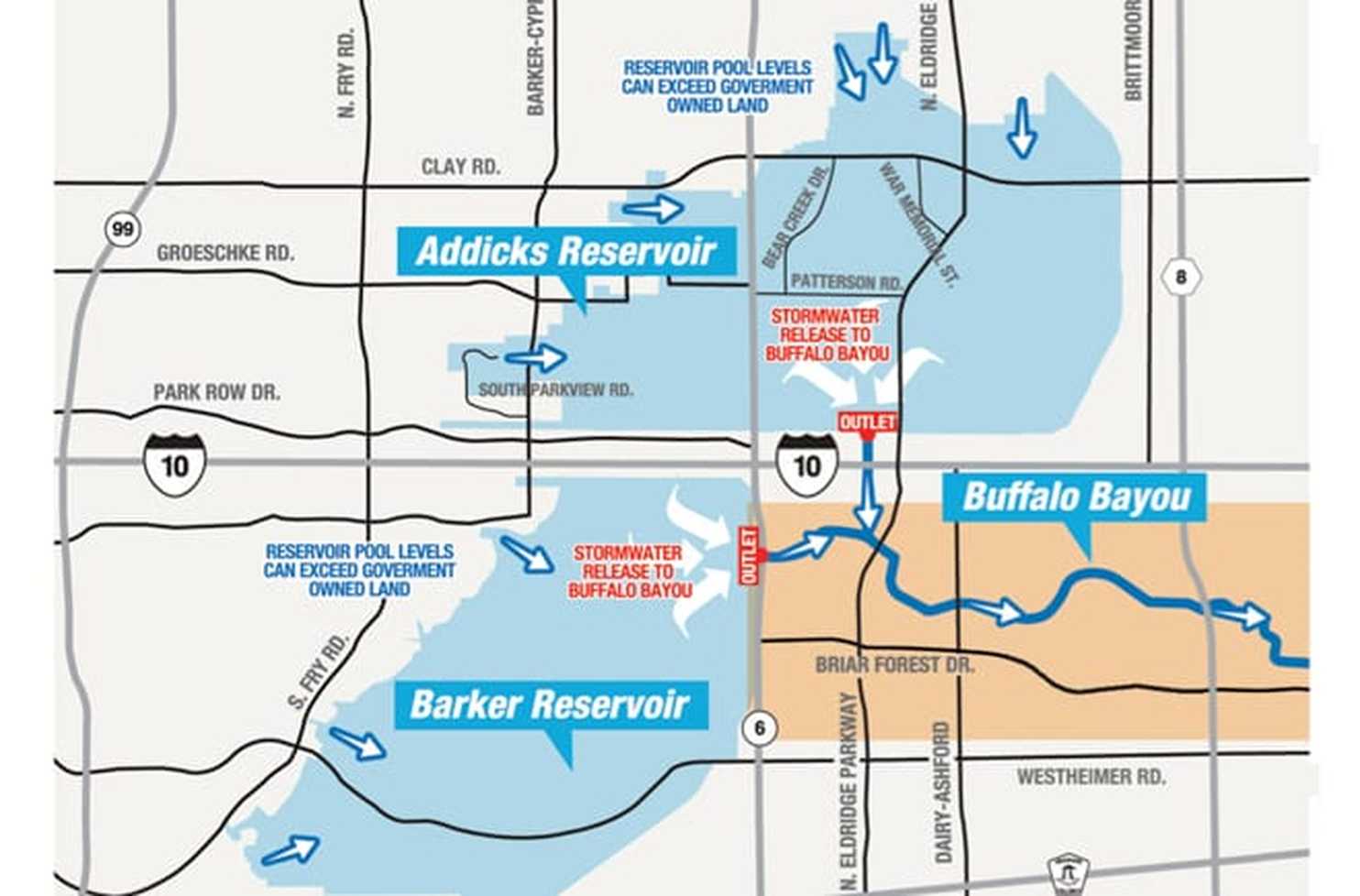 Following the devastating floods and unprecedented releases from the Addicks and Barker Reservoirs both during and after Harvey, one Texas lawmaker is looking to the past for a solution.

“To put a levee system up in that Cypress Creek area is absolutely critical,” U.S. Rep. Michael McCaul (R-Austin) told ABC13 on Monday.

McCaul had just finished an aerial tour of the flood zone. As he spoke, he pointed to a 1940s-era map from the U.S. Army Corp of Engineers that penciled in levees at Cypress Creek.

Ironically, a Cypress Creek levee to block overflows into the Addicks Reservoir watershed was part of the original plan for the Addicks and Barker Reservoir and Dam project when it was authorized in 1938.

While the flood-control reservoirs were completed in the 1940s, neither the levee nor the diversion canal (both of which were intended to divert flood waters to Galveston Bay) were ever built.

Hurricane Harvey made landfall near Rockport, Texas on the evening of August 25, 2017. After making its way to Houston, the historic storm stalled over the city for the next five days. Some areas received as much as 50 inches of rain.

The normally-dry Addicks and Barker Reservoirs quickly filled to near-capacity.

Shortly before 2:00 a.m. on August 28th, the U.S. Army Corps of Engineers and the Harris County Flood Control District began a controlled release of water from the reservoirs to protect their dams and prevent uncontrolled flooding in surrounding areas.

When the U.S. Army Corps of Engineers and Harris County Flood Control District made the decision to increase the rate of release, they did so knowing that water would inundate homes downstream from the reservoirs, including many that had not flooded during the storm.

Ultimately, approximately 4,000 previously dry homes, apartments and businesses—many of which had never flooded before—took on substantial water from the releases.

On Friday, the Harris County Flood Control District mailed letters offering buyouts to more than 3,300 residents whose homes are located at least 2 feet below the floodplain.  Surprisingly, however, plans to send those letters were made well in advance of Harvey.

The Flood Control District has received an additional 2,400 requests for buyouts since Harvey, only 400 of which were considered buyout candidates prior to the storm.

Meanwhile, state, local, and federal officials are searching for ways to prevent the severe flooding that has become an annual event in Houston and its surrounding suburbs since 2015.

Many officials are concerned, however, that the solutions will only go so far:

“There’s nothing we can do to prevent what happened during Harvey,” Operations Director Matthew Zeve told ABC13. “No one can prepare for 40-plus inches of rain over four days.”

Still, residents like Joseph Mustacchia, whose Nottingham home was flooded for 8 days due to the Barker Reservoir release, want a solution.

“I think they definitely could do something to improve the dam capacity, whether it’s strengthen it or raising it to some degree,” Mustacchia told ABC13. “(At least) to keep water from leaking and deliberately flooding us.”

Was Your Home or Business Flooded As a Result of the Addicks & Barker Reservoir Releases? Contact Our Undefeated Flood Damage Lawyers for a Free Consult at 1-888-603-3636 or by Clicking Here

Having recovered over $1 Billion and successfully represented hundreds of home and business owners in connection with hurricanes and severe weather events across Texas and the United States, our Hurricane and Flood Damage Lawyers have the experience and resources to help you rebuilt your future.

Our lawyers will explain your rights, discuss your options, and help you decide the best plan moving forward for you and your family.

All consultations are free. And because we only represent clients on a contingency-fee basis, you’ll owe nothing unless we win you case.