The federal government is cracking down on trucking companies that do not meet safety requirements. In March 2014 the Federal Motor Carrier Safety Administration shut down FTW Transport of Forest Hill Texas. Investigators found that this trucking company failed to require its drivers to abide by federal standards of operation. Drivers routinely exceeded limitations on driving and on-duty requirements and the company did nothing to ensure that its drivers complied with controlled substances and alcohol use and testing regulations. It also failed to meet inspection, repair and maintenance requirements. FTW Transport drivers had been involved in five preventable crashes in the prior 12 months and in two of them the driver had been given a citation for careless driving.

In Texas, the number of fatalities in accidents involving large trucks increased 71% from 2009 (318 deaths) to 2012 (543 deaths). More and more truck drivers are taking to the roads and driving carelessly or working longer hours than allowed. In 2012, 36 of every 100,000 registered trucks in the U.S. were involved in a fatal accident.

Car drivers are at the mercy of big rigs because of their size and weight. It can be difficult to maneuver around a truck that is not staying in its lane or is taking a turn at too high a rate of speed. Many truck drivers feel pressure from their employer to travel a certain distance or to make a required number of deliveries. This can contribute to reckless driving. At least ten percent of drivers involved in crashes say they felt pressure to perform from their employer.

Nationwide, 77% of accidents involving big rigs occur because of poor driver decisions or because the driver is not paying attention. That includes anything from daydreaming to driving too fast, following too closely, driving aggressively or making an illegal maneuver. An additional concern and seen in 27% of truck accidents is a problem with the truck’s braking system. In comparison, brake problems are only a factor in 2% of accidents involving cars.

The Large Truck Crash Causation Study (LTCCS) conducted by the US Department of Transportation from April 2001 through December 2003 found that 55% of accidents involving large trucks were caused by the truck. The study also found that 52% of the acidents involved a fatality or an incapacitating injury. 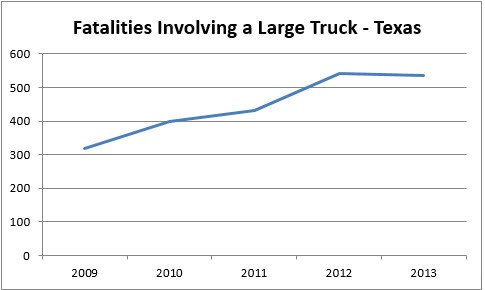 Car drivers need to be hyper-aware and vigilant when taking to the highways alongside big rigs. Most truck drivers drive safely but they are not always able to control their vehicles due to driving conditions, equipment malfunctions and other drivers.

At Zehl & Associates PC, we employ a qualified team of personal injury lawyers who have successfully settled and tried over 200 cases on behalf of clients injured in car, bus and truck accidents throughout the United States. Most notably, we recovered $18.7 in damages against Greyhound Bus Company, a verdict that ranks #51 in the top 100 largest verdicts ever awarded in Texas.

If you or a loved one has been injured in a collision with a big truck, contact Zehl & Associates’ for a free initial consultation and case evaluation.